Li Songtang at his museum in Beijing, where he displays relics saved from demolition sites in the rapidly modernizing city. 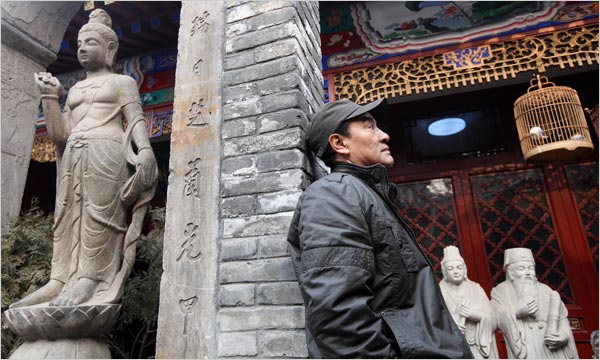 BEIJING — The destruction of this 800-year-old city usually proceeds as follows: the Chinese character for “demolish” mysteriously appears on the front of an old building, the residents wage a fruitless battle to save their homes, and quicker than you can say “Celebrate the New Beijing,” a wrecking crew arrives, often accompanied by the police, to pulverize the brick-and-timber structure.

But before another chunk of ancient Beijing disappears entirely, a hospice administrator named Li Songtang can often be found poking around the rubble, looking for remnants that honor what was among the world’s best-preserved metropolises until a merciless wave of redevelopment gained the upper hand.

Since the 1970s, when Mao inspired his Red Guards to pummel every “reactionary” Confucius temple and Ming Dynasty statue they could find, Mr. Li has been salvaging architectural remnants and stowing them away, sometimes at considerable risk.

Manchu hitching posts. Ornate wooden doorways. A giant granite horse that graced an emperor’s palace. These and thousands of other objects fill Mr. Li’s warehouse and spill across the grounds of the hospice he runs in Beijing’s eastern suburbs.

Every item has a tale. That Song Dynasty lintel etched with a frenzy of folk scenes? Pulled from a pig sty. The lacquered screen that tells the history of a clan of scholars? Fished from the burn pile.

The most historically significant items are displayed in his private museum, where every Sunday he can be found leading tours and exhorting people to cherish the old before it is too late. “For 50 years I’ve been watching the destruction of this magnificent city,” he’ll say in admonishment. “We’ve been treating history like garbage.”

It is difficult to overstate how much of China’s old imperial capital has disappeared in recent years. When the Communists took power in 1949, they inherited a city marbled with 7,000 alleyways, or hutong, a Mongol word that referred to the space between tents. In Old Beijing, hutong were the capillaries that fed the walled compounds where most people lived.

Even if the Communists forced aristocratic families to share their courtyard homes with scores of working-class families, the structures, and their stone-and-wood artistry, remained largely intact. Monument-building and road-widening claimed swaths of the old city in the 1950s and ’60s, and more damage was done during the Cultural Revolution, but the pace surged in the 1990s, when China’s embrace of market economics fueled a redevelopment juggernaut.

In the years leading up to the Beijing Olympics in August, the destruction took on a manic pace. According to UNESCO, more than 88 percent of the city’s old residential quarters are gone, including many government-designated heritage zones whose protections existed only on paper. Today, just 1,300 hutong remain, and many more neighborhoods, like the colorful Qianmen district just south of Tiananmen Square, are scheduled for renewal.

Michael Meyer, who documents Qianmen’s hutong life in his book “The Last Days of Old Beijing,” says most residents are not terribly nostalgic about the old city. For them, a freshly painted facsimile of a 500-year-old Buddhist temple is just fine.

“Imagine waking up one morning and discovering that Chelsea, then Greenwich Village, have been replaced by malls,” he said. “Those who are trying to preserve a bit of the city’s legacy are increasingly isolated and powerless.”

One of Mr. Li’s earliest childhood memories is of the destruction of his family’s courtyard house. Later, during the Cultural Revolution, he watched neighbors burn their own books and smash heirlooms. “People were so afraid that the Red Guards would find antiques in their home, they would toss them into the river at night so no one would see,” said Mr. Li, who came from a family of doctors and teachers.

Like many from the educated classes, Mr. Li was ridiculed, beaten by classmates and then sent to the countryside, where he toiled alongside farmers for nine years. After returning to the city, he devoted himself to rescuing whatever scraps of history he could find. His efforts have sometimes attracted the attention of officials, who have accused him of stealing and obliquely criticizing government policies.

He acknowledges he never paid for anything, although he might give demolition workers a few dollars to cart away a heavy object. “I came to realize that so much of Beijing was destroyed because no one was willing to pay these men for overtime” to haul away relics, he said, half-jokingly.

Mr. Li’s struggle to open his Songtangzhai Museum is a tortured tale that involved five years of kowtowing, cajoling and a “gift” of 148 prized items to the Culture Ministry. The $4.50 entrance fee to his museum, which occupies an 18th-century house, does not cover the cost of operations, so Mr. Li subsidizes it from his own pocket. He says he has never sold any artifacts.

“I have 1,000 stories that I can never tell,” he said conspiratorially, and then offered a few choice words to describe those who blocked his way — and those who have promoted the demise of Old Beijing. But then he corrected himself. “The Communist Party has improved Beijing immeasurably,” he said with a taut smile. “They are doing a wonderful job.”

The Eternal Army: The Terracotta Soldiers of the First EmperorMore than 22 centuries ago, in China's northwestern Shaanxi province, the first Qin emperor was buried in a magnificent tomb surrounded by an army of ... Read More >

Oriental Rugs from A to Z (Schiffer Book for Collectors)