Watch the appraisal video here on the Antiques Roadshow website. Or even better, watch this interview with the owner in North Carolina.

GUEST: My father was in China two different times– I think in the late ’30s and sometime during the ’40s, with the Army, and he was a liaison of some sort. He was just a Kentucky farm boy, but he learned Chinese and he met a Mr. Liang at number ten Jade Street, and that’s pretty much what I remember him always telling me. Mr. Liang would call him and say, “John, I have some pieces you might want to look at.” As children, we heard that some of them had imperial seals, and then I just always have been curious.

APPRAISER: Well, that Mr. Liang must have been a very, very good friend of your father’s, because he led him down the path of great collecting. Generally you see people who purchase things in China at that period of time, and they purchased things that were very, very poor quality. These things are all of very, very fine quality. Did you have any idea about the value on these things?

GUEST: This dragon bowl, as we’ve always called it, we’ve always heard that it may be worth a lot of money, but no, I don’t know the value.

APPRAISER: You start with, basically, the runt of the litter in terms of these groups is that bowl there. And that’s a bowl that’s based on a style from India that they refer to as Mogul style. And it’s Chinese, 18th century. Very, very thin carving, really beautiful, crisp workmanship. This one here is the same style, but only a little more ornate. This is also Mogul style, also 18th century.

APPRAISER: Yeah, they all date from the Qianlong period, which is 1735 to 1796. This one here is set with a ruby in the top and very, very finely carved. The animal is a thing they call bixie. It means to ward off evil. And that animal is just a beautiful piece of celadon jade, wonderfully carved. And then we have the top piece of the group. This one has an inscription in the bottom that is imperial. It has a cyclical date there, which they’re kind of hard to read, because they run in 62-year cycles. But it also has the mark “by imperial order.” Rather than just “made.” So it was made specifically for the emperor himself.

APPRAISER: But you start getting into the value of these objects, and the bowl there, a conservative auction estimate on that bowl would be $30,000 to $50,000.

GUEST: Oh, I love this one.

GUEST: Uh… I can’t believe you.

APPRAISER: And this bowl here, because of the imperial inscription, this would be probably very, very conservatively, $400,000 to $600,000.

APPRAISER: It’s an incredible collection, and he also bought at a period of time where I would doubt if he paid more than a hundred dollars for any one of these pieces.

APPRAISER: It’s the best thing I have ever seen on the Roadshow.

GUEST: Oh, my gosh! I love hearing that. Thank you.

Qing Compiled British Illustration Qianlong Period (Chinese Edition)This book introduces the civilization of feudal society in China during the reign of the plot, impressive, gorgeous and powerful. This volume has 693 figures, most of which are Gong Yan collection of paintings.
Beijing Poly Auction: The Imperial Art of Qianlong Period Nove 30,02007 Kunlun Hotel

English Society in the Eighteenth Century, Second Edition (The Penguin Social History of Britain)A portrait of 18th century England, from its princes to its paupers, from its metropolis to its smallest hamlet. The topics covered include - diet, housing, prisons, rural festivals, bordellos, plays, paintings, and work and wages.

Chinese Snuff Bottles: The Adventures & Studies of a Collector 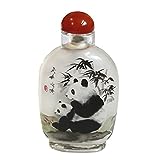 for $24.88 New from $22.88
Painted inside bottle with Chinese photos is representative of Chinese traditional art, usin... read more