While trolling around on the net, I came across this very nice blog post from Posh Living which does a wonderful job of explaining what chinoiserie is which is.  A main staple amoung designers, chinoiserie design elements in a room are timeless and sophisticated.  Since we have talked in the past about how chinoiserie screens are made, their post is a nice addition providing some historical background and is well worth the read.

“What most people don’t realize about Chinoiserie is that the style doesn’t come from China at all. As trade spread around the globe and Europe’s economy matured, more people could afford decorative goods. To keep up with demand for more ornate works, artisans created designs that were pure fantasy. Reading descriptions of Chinese scenes, European designers created their own versions. Often they are whimsical and even silly, and that makes them even more appealing.

Why Chinoiserie at all? Europeans’ fascination with the Far East began in Marco Polo’s day, in the thirteenth century. At a time when few people traveled the world, exotic goods such as silk fabrics, carpets and porcelain reached Europe via a trading route known as the Silk Road, which carried goods by cart and camel across the entire continent of Asia.

For wealthy Europeans, owning artifacts from the Far East was a status symbol. With these artifacts came stories from the traders of the amazing temples and pagodas they had seen and the strange costumes and appearance of the Oriental people. Cultures from Persia all the way to China were called “Oriental” by the Europeans. They made little effort to distinguish one people from another, and the fanciful designs of Chinoiserie often blend Chinese, Japanese and Persian or Indian elements.”

Have a read of the full post here to learn more:

and when finished, the wikipedia page on chinoiserie provides some additional background:

Cake Decorating for Beginners: A Step-by-Step Guide to Decorating Like a Pro

Do you dream of picture-perfect cakes that are insta-post worthy? From glazin... Read More > 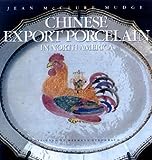 Jingdezhen to the World: The Lurie Collection of Chinese Export Porcelain from the Late Ming Dynasty (Ad Ilissum)